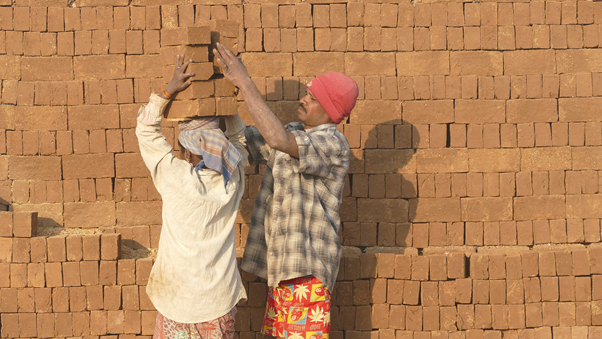 Today at the brick kiln, Kishor heard some shouting and moaning from Mati’s bhonga (shelter). When he went there, he saw that Mati’s husband was beating her up. The husband stopped when he saw Kishor. What was the reason for this beating? We were told that the kiln owner’s wife had called Mati to work at her house, and her husband did not want her to go. Two years ago, Mati used to study at Kishor’s school. Kishor tried very hard to help her read and write. But Mati was simply not interested.

Mati is a stubborn girl. It is difficult to convince her to do something against her wish. Eventually, she stopped coming to school. Kishor would go to the brick kiln to bring her to school, but she wouldn’t listen. Probably, she had realized that she was lagging behind in studies compared to her classmates. She found it more fruitful to work on the brick kiln and earn some money. Last year, she got married. School-going Mati became ‘Mati vahini’. The chords of her earlier life were cut off. She has no other option but to continue the hard life at the brick kiln.

Mati’s story could be the story of any of the girl children on the brick kiln. If girls like Mati are not able to continue their school education, the reason definitely lies in the socio-economic conditions of their families. But part of the reason is also to be found in the school system itself. After the introduction of the Right to Education Act, the non-formal education set-ups such as bhonga shala have been closed down. This is actually the right step, because non-formal education imparted by poorly trained teachers in unstable situations like brick kilns can have severe limitations. Also, once we have accepted education as a fundamental right of the child, it is mandatory that every child must attend school. But are our schools ready to accept each and every child?

When the child realizes that she cannot cope with what is going on in the school, a deep inferiority complex develops in her mind. In such a case, why would she like the school? Our school system is designed in a way that children like Mati have no option but to fail. The language used in the school, the text books – their content and pictures, the school environment, the assessment system – everything works against them. Children continuously get a feeling that ‘we are not going to get there’, and then they start lagging behind in studies.

According to Kishor, children like Mati need a longer time to become habituated to the routine of the school. If the schools give a sense of failure to them all the time, their chances of dropping out increase. Failure in the examination becomes a big push factor in their case. Even after being in the school, a child like Mati may make less progress as compared to other children. But still, it is important that she continues in the system as dropping out means getting married and pregnant at a very young age.

If we want these children to be successful, we will have to make the system much more flexible to suit to their needs. At times, we would need to keep away the text books and bring these children’s world into the classroom. Even the assessment tools need to be developed locally. And the most important of all – we would have to empower and trust the teacher to make this happen in the classroom. Unless we keep away the idea of failing children through exams, unless we give up our fascination for the standardized tests as the only yardstick for success, how will the schools be ready for students like Mati?

2 thoughts on “Are the schools ready?”